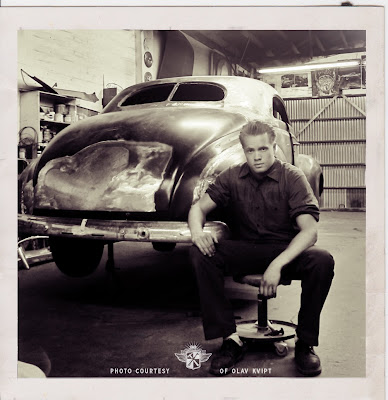 My name is Olav Kvipt b. June 21st 1993, the youngest of the Kvipt brothers from Fyresdal, Telemark, Norway. I moved here to the old Barris Shop premise at 11054 Atlantic Ave. Lynwood on July 15th. Here I'm gonna stay the next three years. My main purpose is to study Auto & Body at Cerritos College, plus Machine Engineer within oil & gas.


My Goals In Los Angeles
I liked my life in Norway a lot, but my main goal has always been to travel to California and build custom cars. Brad Masterson of Masterson Kustom Automobiles took me under his wing, and I have the feeling that we will have a good time here. I have known him for quite a while, and he figured he could use my skills here in Lynwood. So far, we've only made a wooden top for his Skate Truck, preparing it for The Kustom Kemps of America show, up in Salina Kansas. This is my first real work week here, and I must say I like it very much. However, as you might know, I'm one of the two Kustomrama journalists, and I'm here to get hold of as much information and stories from the people who were here in the 1940's and 1950's, which drove, built, or knew people who had custom cars and hot rods.

Gratefull Of My Older Brothers
I'm so happy that my oldest brother Kjetil teached me how to do bodywork, upholstery, paint, welding, and much more. He is a real great customizer, with eyes for proportions, and hands for fabricating! And I'm also very happy that my brother Sondre introduced me to the Kustomrama when I was 13. They are the greatest persons I know about on this planet, along with my parents of course! They are not only my brothers, but I consider them as my best friends as well! We all share the same hobbies, always have, and I got a strong feeling that it will continue that way. My goal is to represent them as good as I can, and show the world what we Kustom Norwegians are good for. 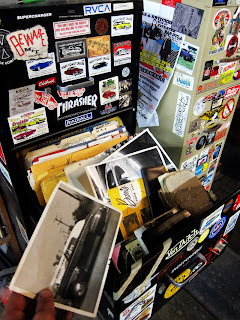 The Brad Masterson Collection
After my work is done in the shop, I use the evenings and nights to scan and document Brad's incredible collection of old Barris memorabilia and pictures mainly from the late 1940's to mid 1960's. When he worked for George up in North Hollywood, George had a real clean up, and threw away a lot of his old stuff that he considered garbage. Well, as the saying says, another man's garbage is another man's gold. Brad rescued all these papers and photos by diving into the container and fetch the stuff. I'm real happy that he did, because I've found some neat old pictures from the 1940's of really nice unknown customs that I have never seen before! I will share them all to you folks, I've scanned about 700 photos, and my computer memory is now full.. 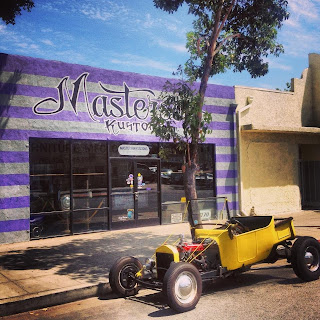 Please Stop By!
If you wan't to share your history about how you got into customs, or have old pictures from the time youngsters in customs roamed the streets, please stop by at Masterson Kustoms in Lynwood!


Be sure to follow my blog, I won't disappoint you, at least not if you'll like old customs and hot rod!