I Still Miss Someone


Could not sleep last night, there's just someone on my mind all the time.. I'm not talking about a girl, but my third brother, who is no longer among us. It is his birthday today, and he would have turned 25 years old. Unfortunately I don't have the ability to congratulate him, but I know his spirit is still with me. Sometimes, late at night, I can often smell his perfume, and then I just know he is there!


His name was Are Kvipt, a real happy and satisfied boy who was as much into old cars as me and rest of my brothers. He was born August 8th, 1988, and was closest to my age of the brothers. We grew up together far away on a farm, miles away from civilization and friends. This brought us even closer, and we had each other to play with. We shared the same interests, and used our mind and fantasy to create cool vehicles, homemade bombs, stealing mom & dads car for a small trip, go fishing on the lake, go hunting, snowboarding you name it! That is what country boys do!

It was the summer of 2005
He had completed his first year of high school, and worked at a water amusement park. All of us brothers moved out of the house when they turned 16, to go to high school in the nearest town, 80 miles away. This was his first summer away from home, and it would also be the last. On August 1st, he and a friend got each tattoo. They took their motorcycles to the tattoo artist in the neighbor town, he actually got tattooed the flying eye-ball by Von Dutch. And on the way, the tattoo artist's brother offered them a ride back in his car. The fact that the driver was under influence, and to much speed, they head-on collided with a car, killing my brother, his friend and the driver. 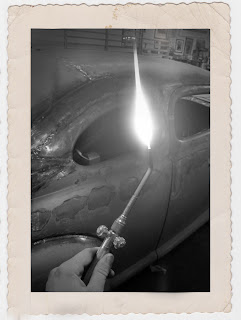 My Torch Is Lit For Are Kvipt
That was the hardest time of my life, and I almost remember nothing from the 2-3 years after the accident. It was just a enormous shock, and I kept telling my self that it was not true.. But I can't feel sorry for my self, loosing a brother and bestfriend is one thing, but loosing your son is 100 times worse. Poor mom and dad, it was hard for them, but they'd managed to keep it going. 8 years has gone by, and it tears my heart apart when I'm thinking about it. However, I know he is well wherever he's at, and I really miss him a lot. He's the first thing I think about when I wake up, and the last I think about when I go to sleep. I went looking for a candle to light on his birthday, but I could not find any in the ol' Barris Shop. So I figured I could lit my torch, I know he would have liked that better anyways! I can feel he is with me, maybe in another dimension, but he still takes care of me, I know it!