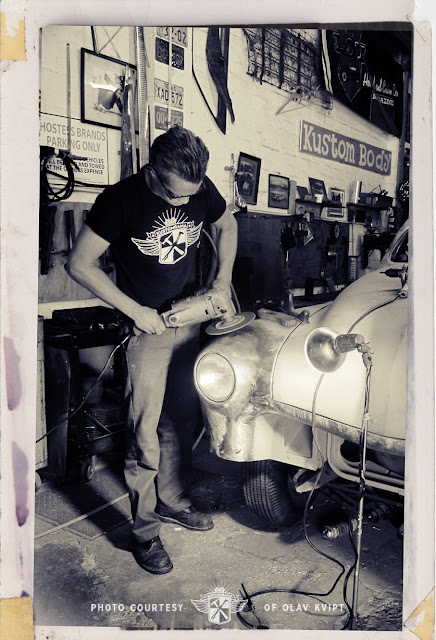 This week at Masterson Kustoms have been a great week with many cool adventures! On monday, Brad wrote a list of things to do on the different cars. I went away and brazing holes, filing lead, adjusting door gaps, and making shelves and brackets for an old 1958 International bread truck, that is going to house two Triumph bikes and race gear. 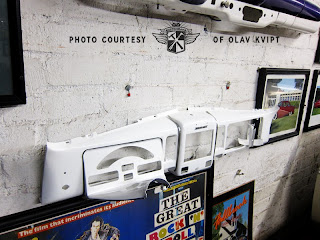 Collecting parts for my 1939 Merc!
On the way home from Kansas, I stopped by all the junkyards I could find, trying to collect parts for my Mercury. There was only one guy that had 1939 Merc parts. 20 years ago, he had a 39 sedan that he sold, but for some reason, he kept the dash.  Exactly what I was looking for, since it's missing in mine.  A deal was made, and I was the happy new owner of a rusted and old 1939 Merc dash! However, this is how it looked after sandblasting and powder coating! It's not going to be white, Brad said it was easy to wire all the gauges and stuff if it was white on the back. 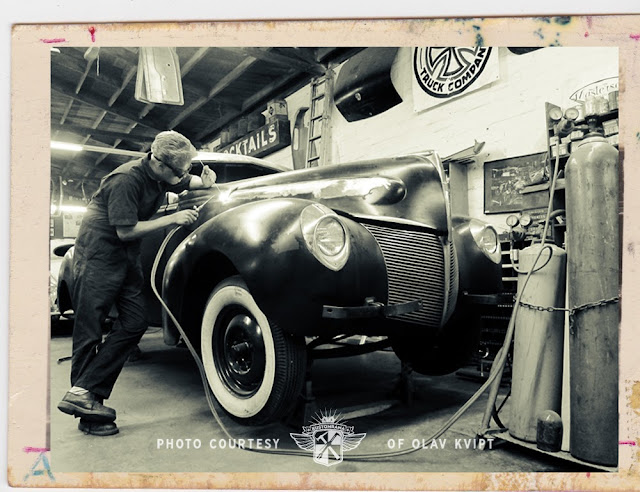 Brazing
Brazing is something new I have learned here. In the 1940's, brass was used in areas where the metal would warp easily. Like molding fenders, welding seams after a chop job, filling drip rails and such was common to use brass on. The material is very nice to work with, and it is also strong. It's nice to practice on this 1940 Merc, it will be almost like mine, chopped with molded fenders, etc. And it kind of reminds me of an old Barris custom that once belonged to a relative of mine in 1947. Just look at the pictures. 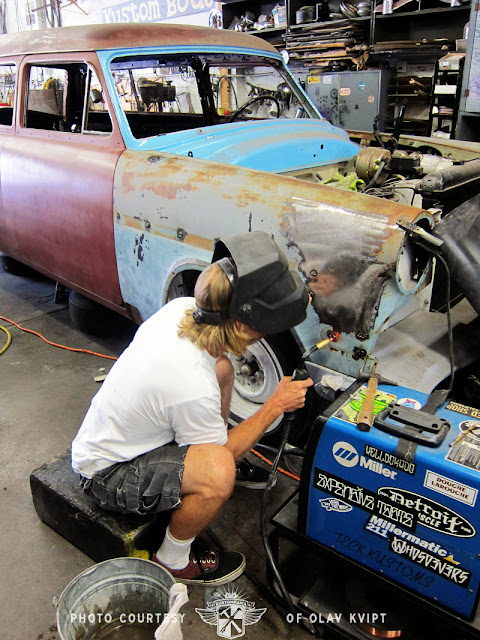 Alex SoRello
On tuesday, Alex, the guy who has been working with Brad the last year tried out welding for the first time. Alex is Brad's childhood friend from Sacramento. They were like peas and rice back then, skating the streets of Sacto and messing around with go karts, having fun with no cares in the world. When Alex was 18, he was put in Folsom Prison for robbing a pizza place. Here he stayed for the next 8 years, loosing some of a man's best year behind the walls of Folsom.. When he got out, he found a girlfriend, got married and settled down in Sacramento. As time went by, he got two kids, that he loves spending time with. Around a year a go, he got divorced, and started working for Brad. He's in the learning phase, picking up tricks by watching. At present, he is working as a "shop quality preserver" as I call it. He really likes cars, and is willing to learn the art of building them. He has a 1923 Ford up in Sacramento with a Ford OHV V8 that he is working on in his spare time. 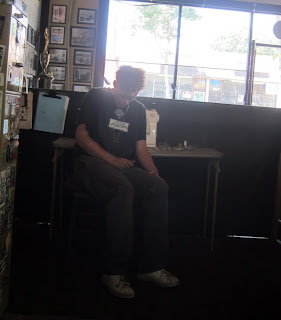 Dr. Dre looked like needed a real doctor on tuesday. I think he was kind of hangover after partying with some russian girls on Monday, he never told what happened. His real name is Andreas "Fisk" Johansson, but here they just call him Dre. He usually visit the shop for two or three weeks at the time, twice a year. He works hard in Sweden, and travel to California when he can afford it. He's currently looking after an American lady to marry, so he can get a greencard and move over. Back home in Sweden, he has a 1950 Olds 98 4-door that he is restoring. He's missing the trim piece around the windshield for it, so please comment if you have the parts he need. 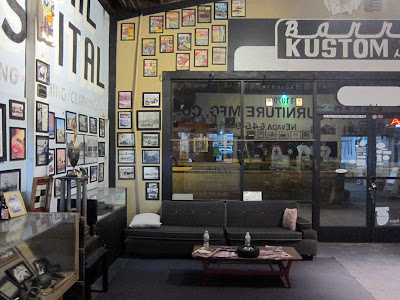 When everybody has gone home from the shop, I usually crank up Glenn Miller on the stereo and keep scanning old documents and pictures from Masterson's Barris archive. About 4-5 AM, it's bedtime. 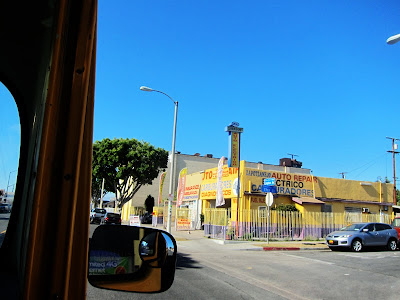 The Barris Compton Shop
On wednesday, we went and bought some square tubing for the Bread Truck. We were in the Compton area, and I requested to visit the old Barris Custom shop at 7674 Compton Ave. Look at it, a lot has changed since the 1940's unfortunately.. 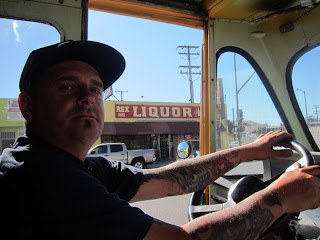 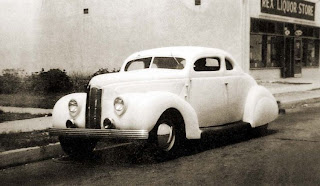 Rex Liquor Store
We also had to stop by the famous Rex Liquor store, that's right across the street to buy some Dr. Pepper! 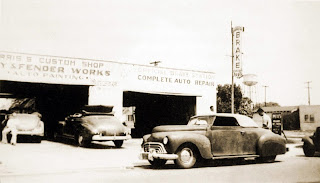 George and Sam rented one of the stalls for their custom work. The other belonged to a brake garage. The front half of the old Barris shop has now been refurbished into an insurance office, and in the rear, they rebuild carburetors. Alex, who owns the place along with his brother Eric, told that when they refurbished the office, they found an aluminum sign which it said "Custom, Body & Fender Works" on. They did not know what it was at they time, and threw it away.. 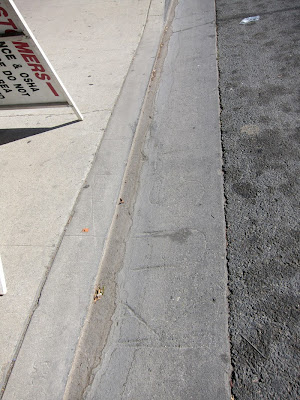 The owners recently discovered these words in the pavement outside the shop. It says Kustom. But I doubt this is from the 1940's. They did not spell Kustom with K until the Lynwood Shop, and the pavement looked to new as well. 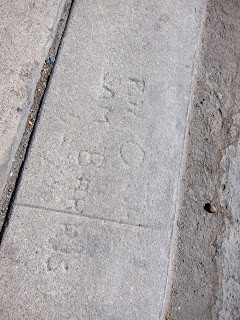 Here it says Sam Barris, and a date beneath it. 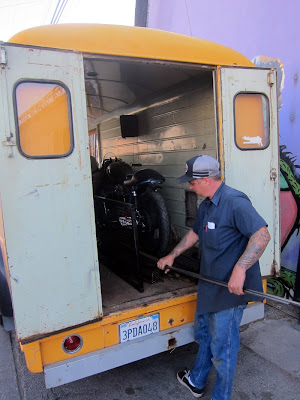 Then back in the shop, we could continue making all the brackets and shelves for the bikes and gear. We also bought steel to make for pogo sticks, which is used when chopping a top. 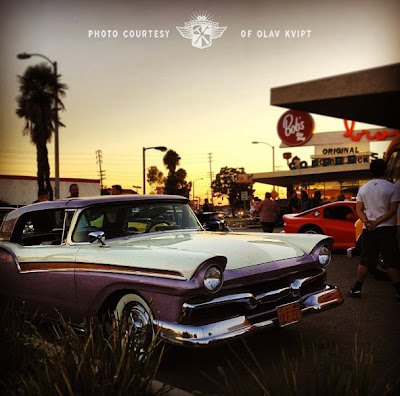 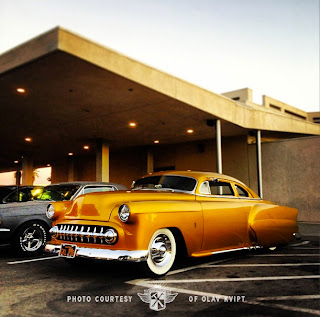 Big Boy Bob
On Wednesday after work, Brad, Roby Ballard and I went to Big Boy Bob for a hamburger. There were a lot of cars there, and very good food! It's nice to see equally minded people hang out on wednesdays on Bob's. 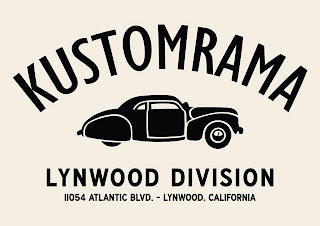 T-shirt designs!
Sondre Kvipt, my older brother was working on designs for The Kustomrama Lynwood Division t-shirts and work shirts this week. Since I am building a clone of my relative's 1939 Merc, it would be cool to use that car as a design. I think it came out pretty neat, looking sharp and period correct! 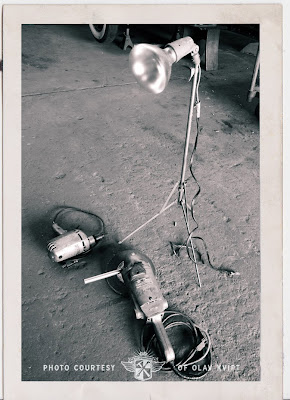 Swap Meet
On friday, me and Brad went to a Swap Meet up in Pasadena! I bought some old tools up there. Found an old Milwaukee grinder from the 1950's, and an electric Dyno-Mite drill. Also found this old cool work lamp, a Rab lamp attached to a music stand. Brad's grandfather gave Brad the same stand which he had in school in the 1930's. So I like to think a young student saw this music stand in the 1930's-1940's, and thought it could be a great lamp stand in his garage :) The Coolest thing was that I found out that all the stuff worked when I tried them! 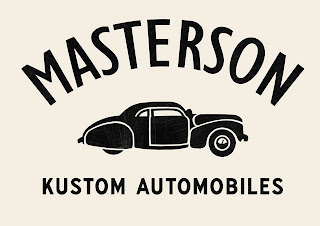 Work Shirts
Brad and I also went and bought work clothes. We bought the old time stuff, so now we can work with style. The shirts are going to have this prints on the back.


Saturday, Disneyland!
After the week was done, and saturday was comming up, we decided to go to Disneyland! Sonja's friends, Renee and Sarah met us there, and we all had a blast!! This was my first time there, and man, that place was so good engineered! The whole place is a true piece of art, just go there and study all the small details! I also recommend the rollercoasters and log-run! We stayed there until midnight, and went to Viva Mexico to cool down. 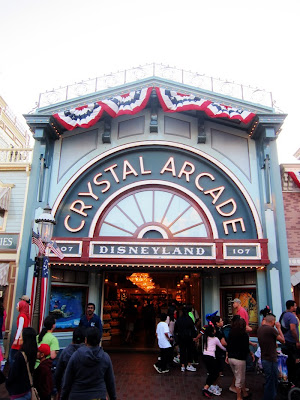 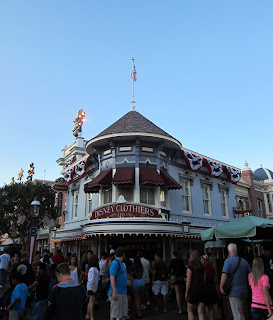 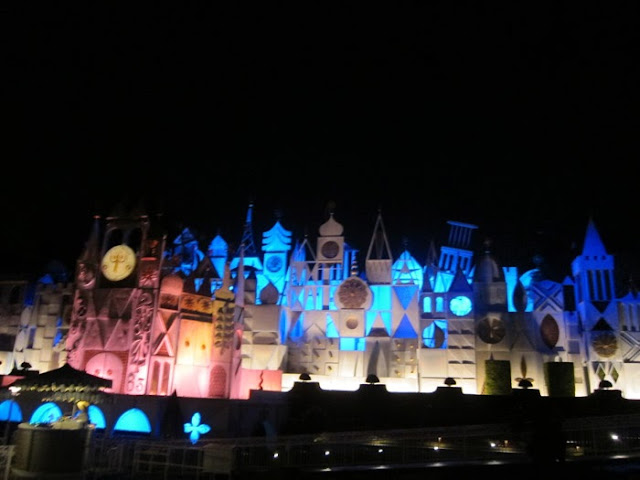 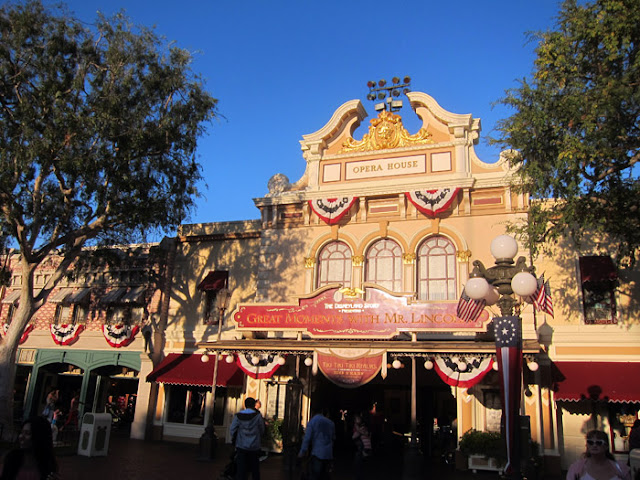 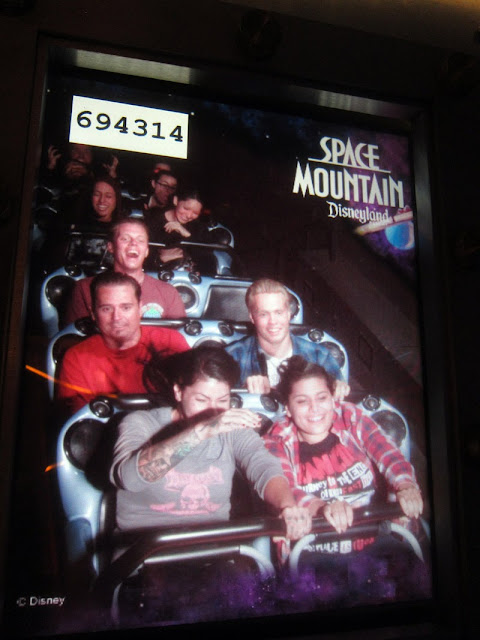 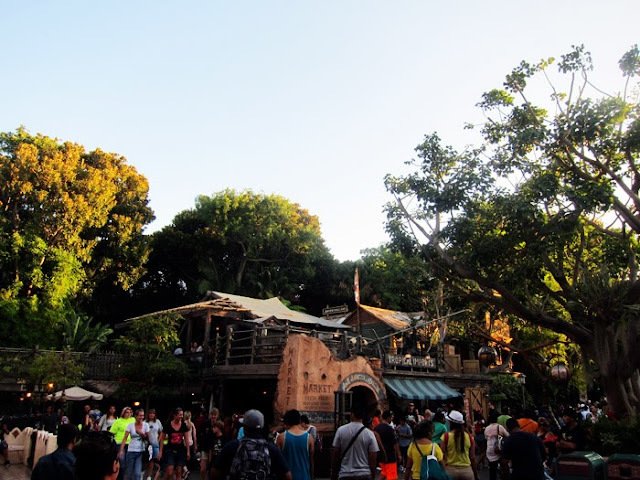 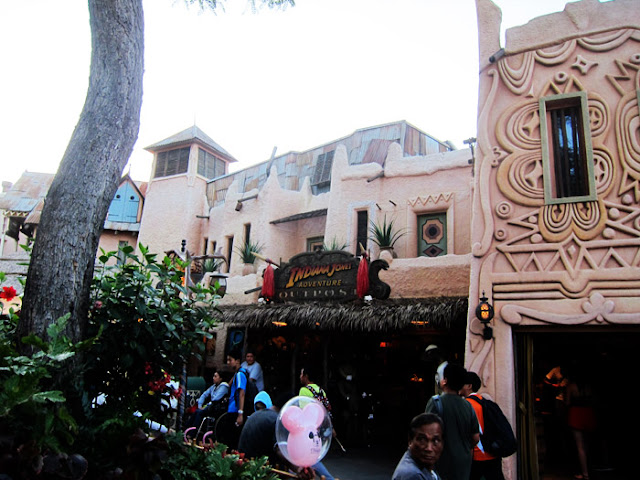