The Kansas Trip! Part I

There's one special event in my stay over here I've not written about yet. Our unforgettable trip Kross Kountry in July! Setting off with Partyswede Dr. Dre, two Japanese dudes refereed to as Canonball and John Wayne, famous skater Riky Barnes, Sonja and Brad. We left with three pre-1960 cars, traveling a total distance of 4000 miles heading for Kansas! It became my best trip ever! Be prepared, you'll soon see why! 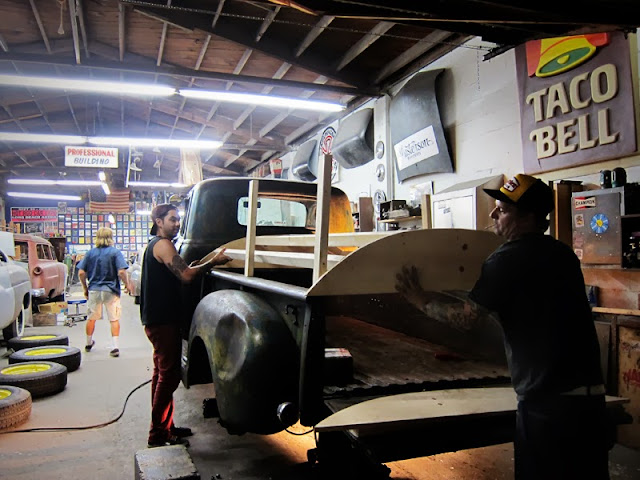 We made this wooden shack to mount in back of the truck! The intensions were to keep John Wayne and Cannonball in the truck bed all the way to Kansas and back. Me and Dre drove the truck, Brad & Sonja the Oldsmobile, and Riky in the T. This would also function as my hotel during the trip. 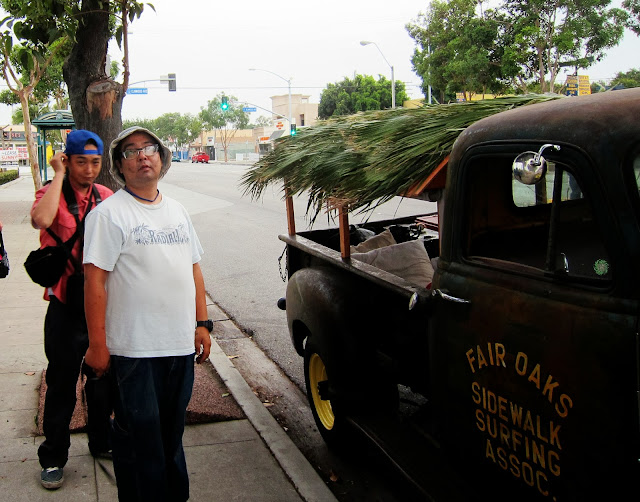 Here's Toschi, aka John Wayne to the left, and Tad, aka Cannonball on the right. They were very exited about the trip! 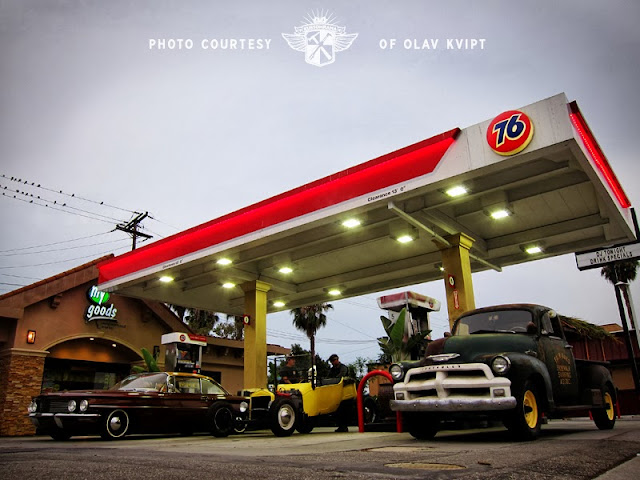 We left in the evening about 6pm, and we were ready to drive all the way to our first destination, Santa Rosa, New Mexico. 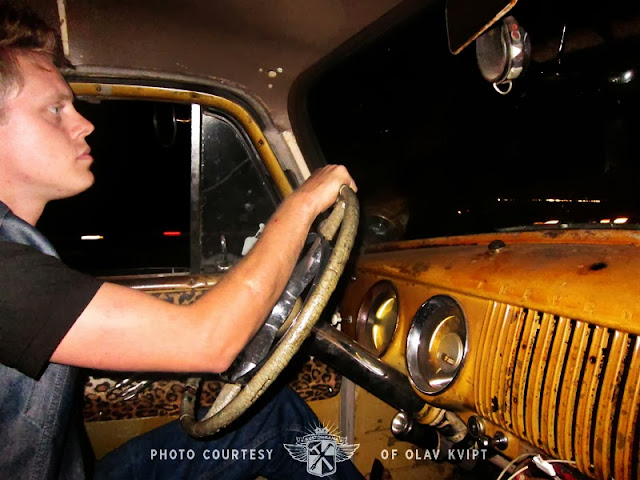 Dre got to drive first. The steering was so loose and horrible that he hardly could keep it on the road.We pulled off the road, and I went under and adjusted the steering to where i was almost perfect! Trip saved.


I must say, that feeling of driving a worn out Chevy pickup from 1954, was quite a blast! Crossing those American dessert roads, along with a Hot Rod and a 1960's custom. Listening to old country and trucker music just wrapped up the feeling! Just look for yourself! 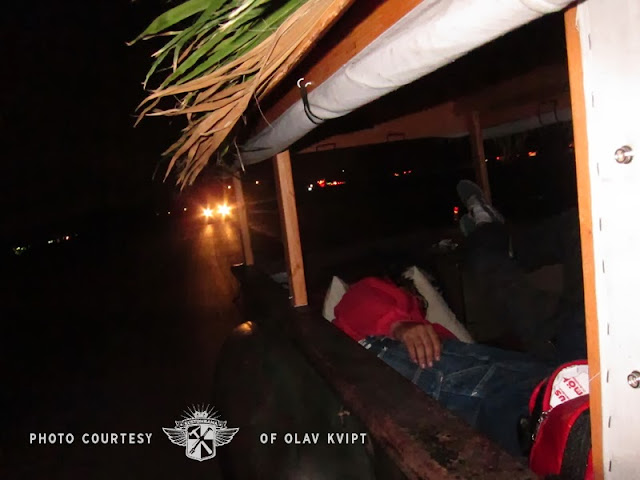 John Wayne and Cannonball fit perfect in the bed, aling with all the gear! We looked like real gypsy's! 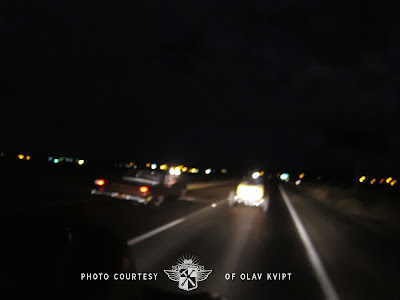 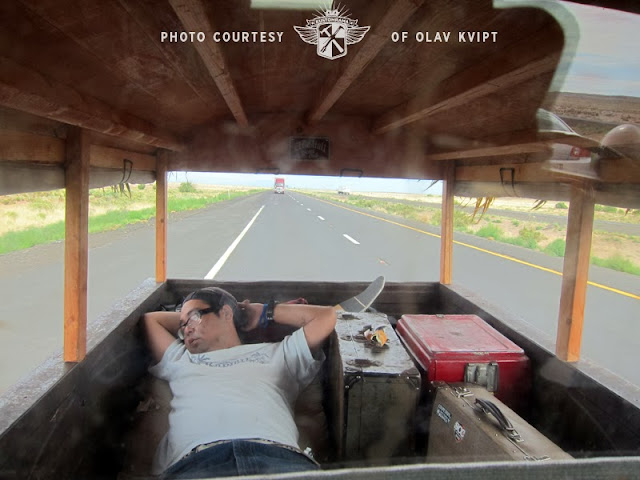 Tad aka "Cannonball" slept most of the trip, so we began to call him Miss America. 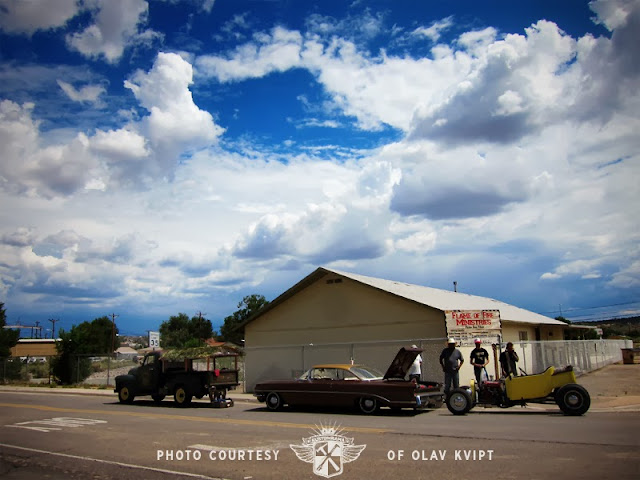 This was our first pit-stop, somewhere in New Mexico. The rear end seal on the Olds went out after hitting a bump in the road. 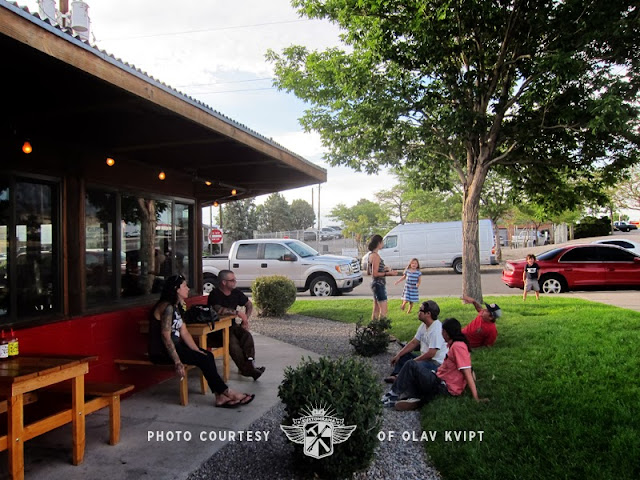 We filled up the rear end, and headed for Albuquerque, New Mexico! Here we ate the best BBQ I ever tasted, at Rudy's Bbq! 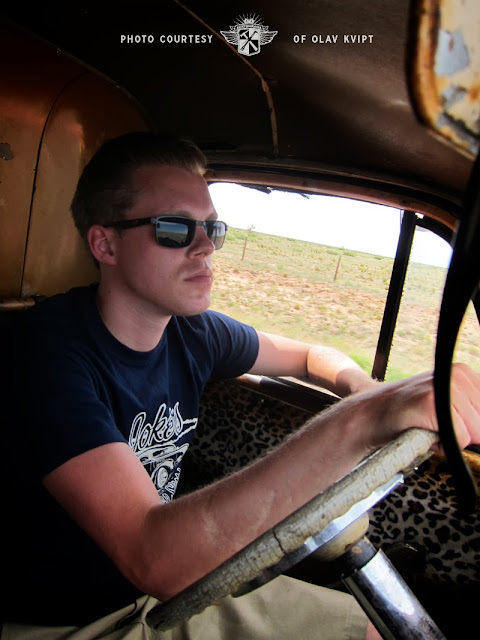 Shortly after leaving Albuquerque, the truck broke down. Brad and rest of the gang went ahead, and me, Dre and Tad were on our own. 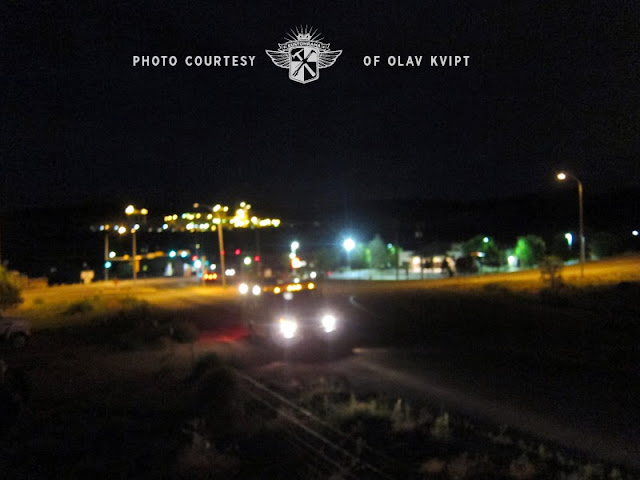 In the middle of nowhere, also known as Bernarillo County, we were stuck. The fuel pump was shot, and we figured out we could make a gravity fuel line with some equipment. We walked to the fire department, were the staff were extremely helpful and nice. We needed a gas can, and a hose so we could transfer gas from the truck to the gas can. They gave us the equipment, and they even gave us a lift in the firetruck back to the truck! First time I've been in a firetruck! 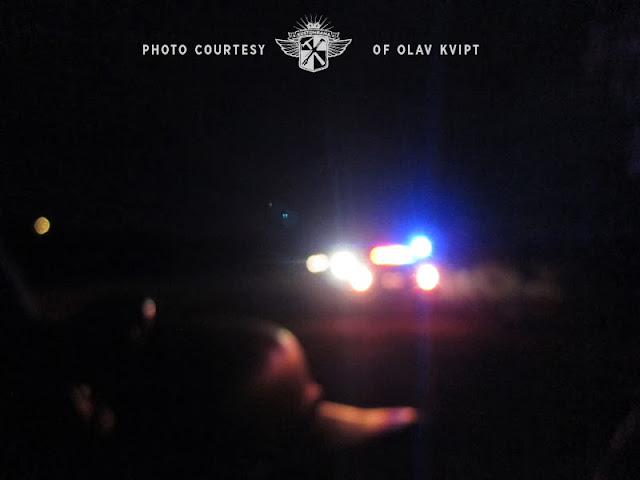 We were also low on gas, so we needed some fuel. We found a closed Subway (the sandwich place), with a lady inside. We asked if she could help us get some gas, but she called the cops, afraid that we were some kind of crooks.. 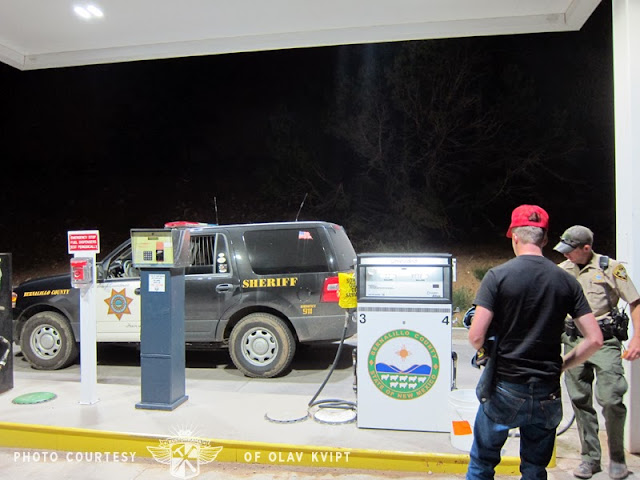 Dr. Dre convinced the Sheriff with his swedish charm, that we were not robbers, but poor scandinavians in need of fuel. 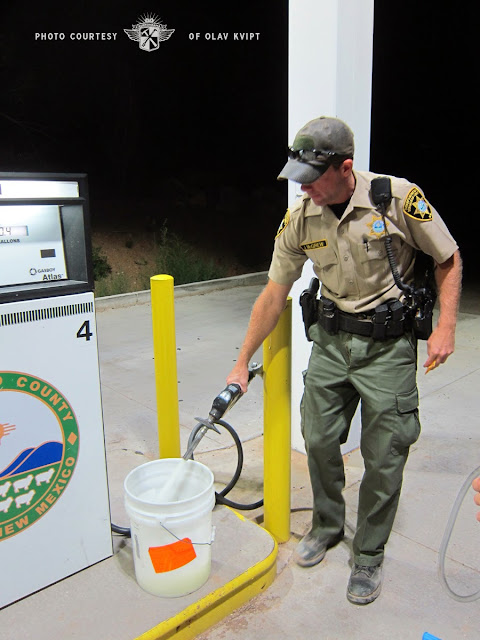 Here's McGrew, that we later befriended on Facebook, filling 6 gallon of gas for us. The truck sure ran good with government filled gas! 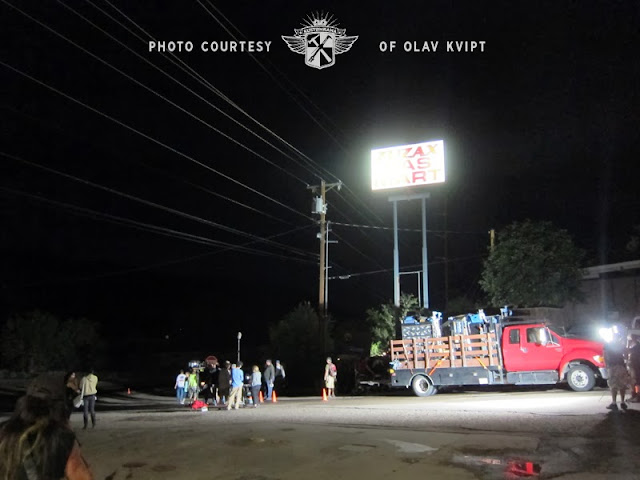 When we thought all the action was over, we stumbled right in the middle of a Hollywood movie shoot, at the local gas station where we stopped to fill up the truck! We were bystanders for a while, and they filmed us blasting off with a sleeping japanese in the back! Tad actually slept through the firefighters, cops, and movie-shoot! 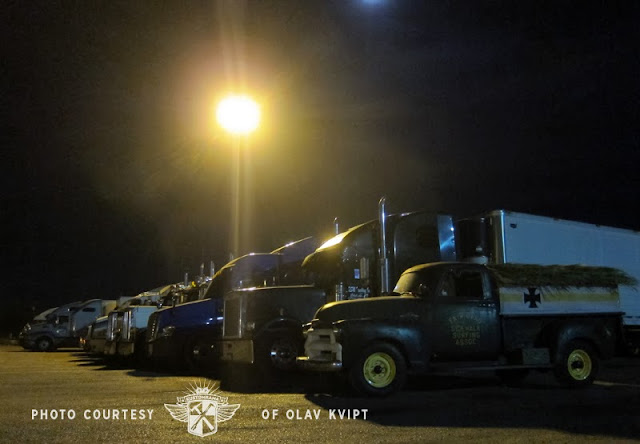 A couple of hours later, we stopped at this trucker place to take some photos of the truck with some big trucks, and to take a coffee. Incredible enough, we stumbled upon Brad and the gang at the very same truck stop! 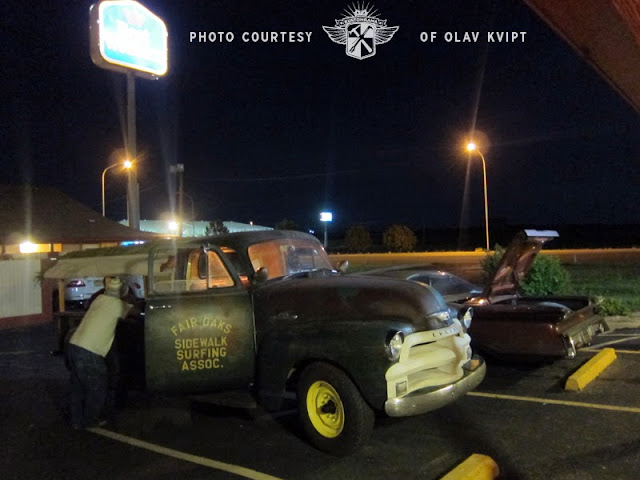 Santa Rosa, NM was the final destination for now. We stayed here the next 3 days. A sleepy little city along Route 66! 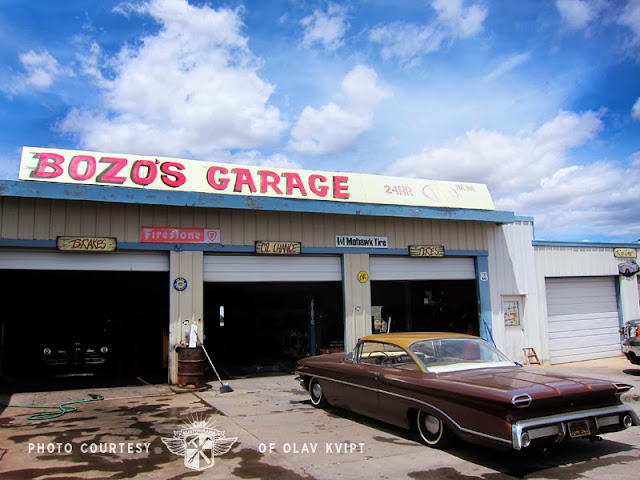 The Olds was fixed at Bozo's Garage. An easy repair, but the part took 3 days to arrive. 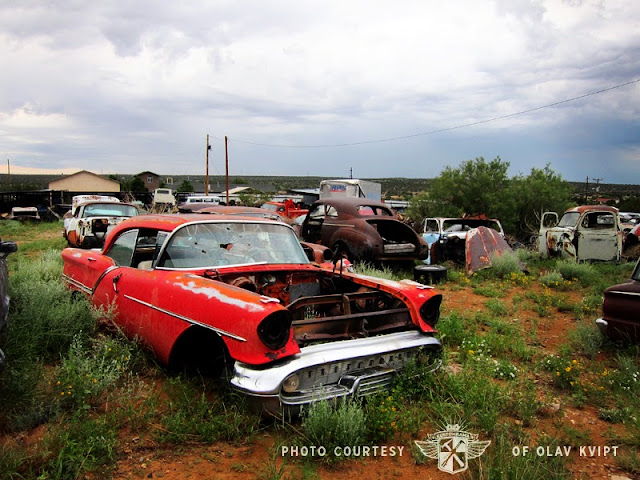 His backyard was just stuffed with old cars from the 1930's to 1960's! So cool to wonder around there! 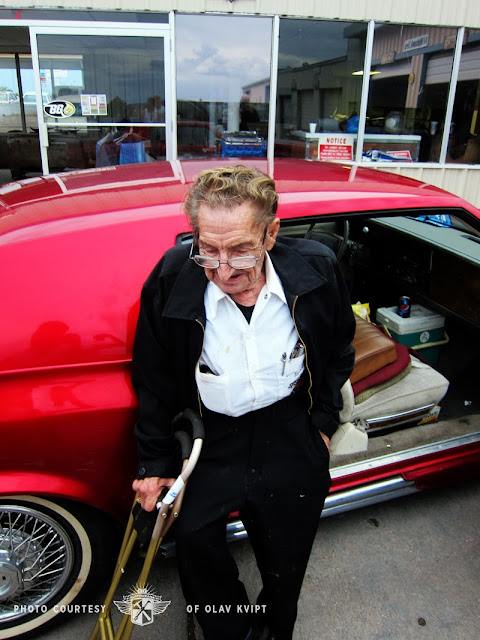 Bill Hines met us in Santa Rosa as well! 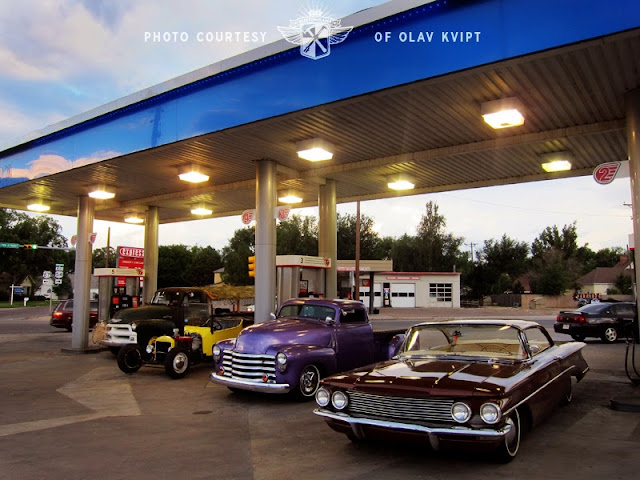 The one and only, Jack Rudy, president of the Beatniks joined our alliance to! 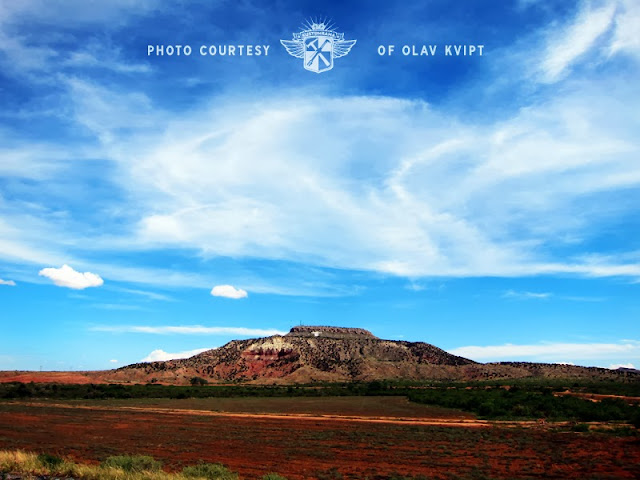 We continued the trip, cross Bonanza country! Real nice scenery out there! 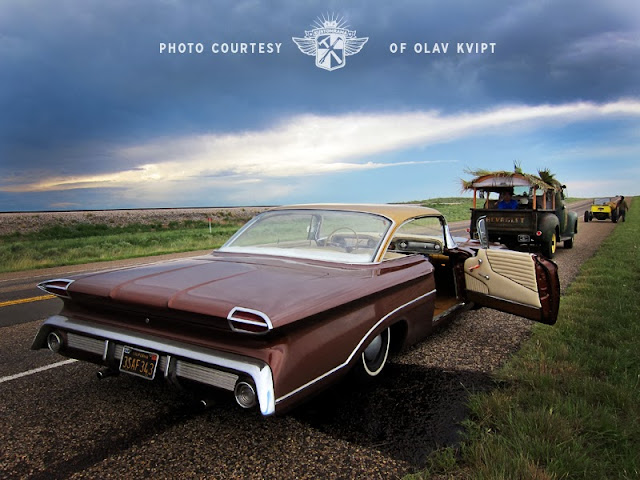 In Texas, Sonja was unlucky and drove over a piece of tire from a truck. As you might see, it hit the gas tank, which was just minutes before filled up to the brim.. 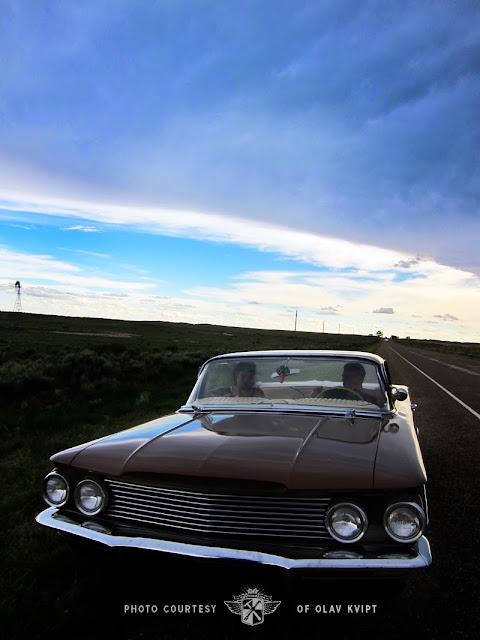 We towed the car withthe truck to the nearest city, where we installed a temporary boat gas tank. 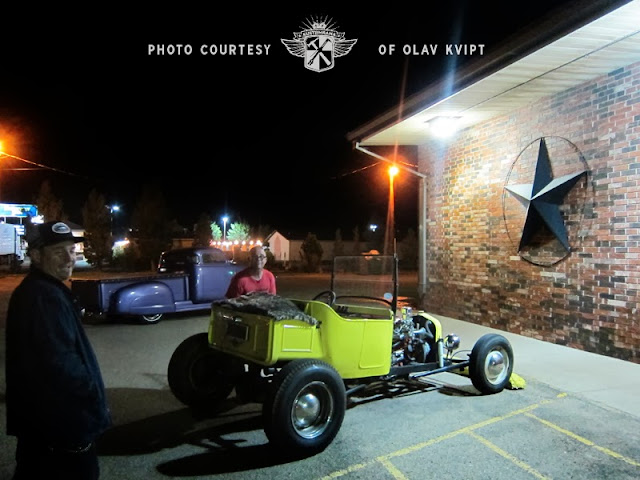 And since we were in Texas, we just had to eat a big ol' steak!! Look how happy the boys were! 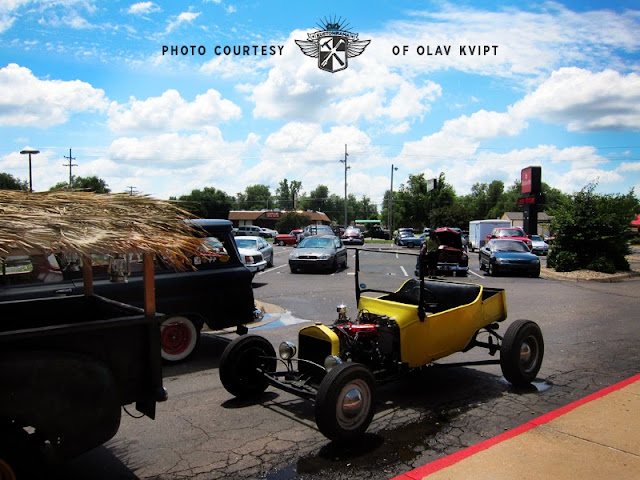 We drove all night across Texas and Oklahoma until we hit our destination, KANSAS! 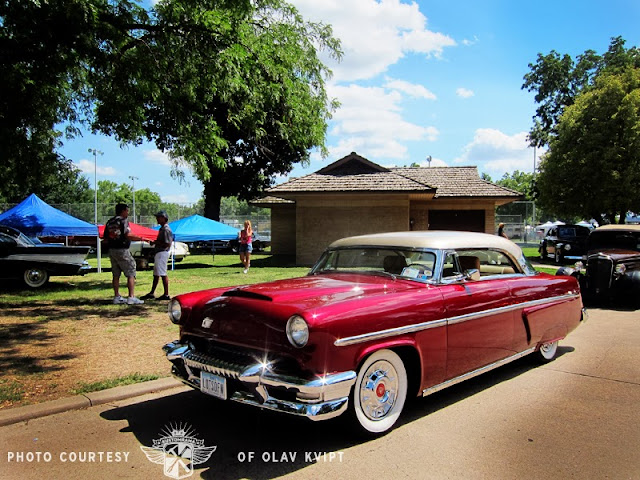 More about the show and trip home later! The fun don't end here! Stay tuned for part II in this amazing journey!
Posted by Unknown at 4:15 AM